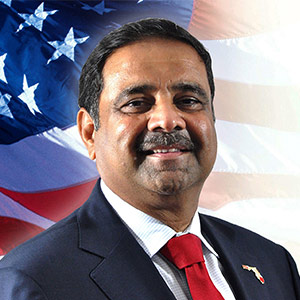 Digvijay “Danny” Gaekwad was born in Baroda, a former princely state in western India as the son of a Judge and grandson of a Colonel in the Indian Army, Danny graduated in Political Science from the prestigious Maharaja Sayajirao University of Baroda. He arrived in the United States with his wife Manisha in 1987 to live the American Dream. Three decades later, he is recognized as a visionary, passionate leader and formidable change agent.

He is a ﬁrst-generation American “renaissance entrepreneur” and community leader based in Ocala, FL. He is the Founder-CEO of NDS USA, an IT & Cloud Services company, and the Founder of Danny G Management, which owns and operates various restaurants and hotels. He also owns DG Hospitality, a hotel and restaurant management consulting company, and Danny Gaekwad Development & Investments, which oversees his real estate investments.

In a business career spanning nearly three decades, Danny has built over a dozen small-and medium-sized companies in diverse areas that include convenience stores, real estate development, hospitality, and information technology. Over the years, his companies have created thousands of jobs in Florida and other parts of the United States, contributing hundreds of millions of dollars to the economy. in 2016, Danny was recognized by then Florida Governor Rick Scott with the “One Million Jobs” certiﬁcate of appreciation for his contribution “in helping Florida job creators add 1 million jobs between December 2010 and December 2015.”

In the past three decades, Danny has served in a variety of public, private and non proﬁt leadership roles including:

Danny has been recognized at the local, state and national levels on numerous occasions for his accomplishments in business and community service including: