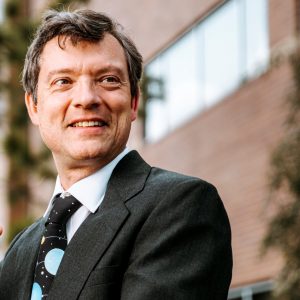 Dr. Joseph Harrington chairs the UCF Faculty Senate.  He is a Pegasus Professor in the Planetary Science Group of the Department of Physics and UCF’s Florida Space Institute (FSI). He earned his BS in Physics and PhD in Planetary Science, both from the Massachusetts Institute of Technology.  He came to UCF in 2006 as one of five founding faculty in the planetary science program, which established PhD and MS tracks in Physics and began accepting students in 2009.  Physics and FSI now host about 20 eligible planetary PhD advisors, including several at Arecibo Observatory, which FSI manages for the National Science Foundation.  Prof. Harrington developed and teaches undergraduate and graduate courses in planetary atmospheres, numerical computing, and astronomical data analysis.  He is the Faculty Advisor of Fencing Knights at UCF and Contra Knights, a student folk-dance club.

His dissertation focused on Saturn’s rings and Jupiter’s atmosphere, including numerically modeling the 135,000 mph collision of Comet Shoemaker-Levy 9 into Jupiter in July, 1994.  His prediction was verified in subsequent observations with the Hubble Space Telescope.  After two years as a National Research Council Resident Research Associate at NASA Goddard Space Flight Center, he spent nine years funded on his own research grants at Cornell University before coming to UCF.

He is also a leader in the open-source movement.  He ran the documentation effort for the fundamental numerical packages of the Python language, numpy and scipy, and sat on a National Academies committee that provided open-source policy options now being implemented in NASA grant programs.  He has led numerous open-source projects.

A UCF Faculty Senator in 2011-2012 and since 2014, he has served as Senate Parliamentarian and has averaged about twelve simultaneous committee assignments in recent years.  These include chairing several departmental search committees and serving on the Senate’s Steering, Information Technology, ad-hoc Governance, and “Committee on” Committees.  He created the bylaws framework for the Department of Physics, authored the UCF Faculty Constitution’s article on shared governance, and has proposed numerous Senate resolutions.

Promoted to Associate Professor in 2009 and Professor in 2013, he won Research Incentive Awards in 2011 and 2016 and Excellence in Research for the College of Sciences in 2012. He is a member of UCF’s Scroll and Quill Society and was named a Pegasus Professor in 2020.  Dr. Harrington lives in Central Florida with his wife and teenage son.